The Samuel Irving Newhouse School for Public Communications at Syracuse University is widely recognized as one of the most prestigious journalism schools in the United States.

Founded in 1964, S.I. Newhouse graduates some of the most recognizable names in sports broadcasting every single year.

Here’s a closer look at just a few Syracuse products: 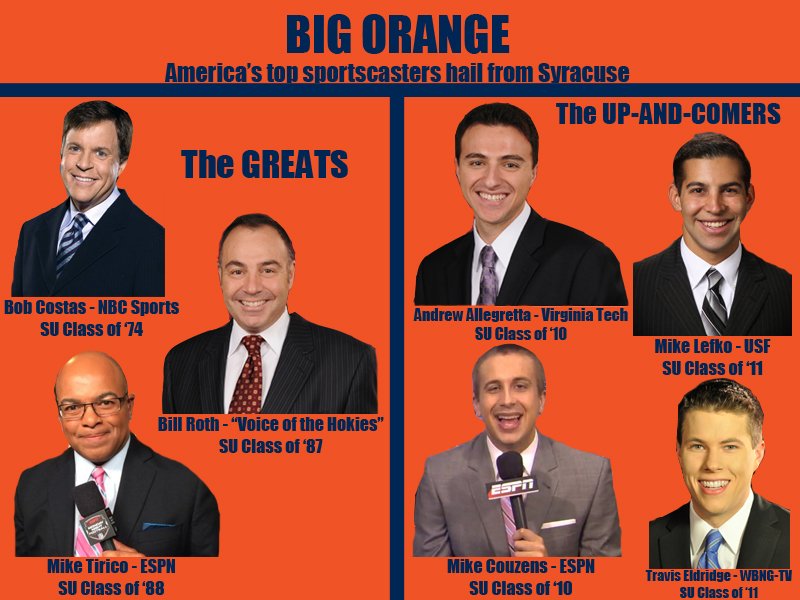 Each broadcaster listed above spent his free-time as an undergrad working for Syracuse’s student radio station, WAER-FM. When working for WAER, students are given the opportunity to work hands-on as broadcasters, studio hosts, producers and anchors to bolster their resumes.

This year, Mike Tirico, the play-by-play voice of ESPN’s Monday Night Football, was inducted into the WAER Hall of Fame on February 28, 2014.

Bill Roth, the play-by-play voice of Virginia Tech football and men’s basketball, as well as Sean McDonough, play-by-play broadcaster for ESPN, were inducted into the WAER Hall of Fame on August 23, 2014.

So, what is it about S.I. Newhouse and WAER-FM that draws so much new talent to its program? Most alumni will tell you the list of famous broadcasters that come from Syracuse was enough to make them want to attend classes there. However, those same people will give you many more reasons as to why they wanted to call games for the Orange.

“The faculty and facilities at the Newhouse school are top-notch,” said Mike Couzens, play-by-play broadcaster for ESPN and 2010 graduate.

Andrew Allegretta is the voice of Virginia Tech baseball and women’s basketball.

Mike Lefko graduated from Syracuse in 2011. He now works for the University of South Florida as the broadcast coordinator.

“I think I truly learned how to be a broadcaster from my time there,” said Lefko.

Travis Eldridge, a 2011 alumni and current sports anchor for WBNG-TV in Binghamton, NY also has fond memories of his alma mater.

“Between the friendships I made, the experiences I had, and the opportunities given to me, I don’t think I could have picked a better school,” said Eldridge.